Hank Claycamp sits in his Centralia home in November of 2010 with some of his drawings from his travels around the world.
Brandon Swanson / The Chronicle

Hank Claycamp’s vivid imagination perceived that some woolly mammoths were pulling a Union Pacific train while he was riding the rails in northern California.
Drawing by Hank Claycamp

A few days after Thanksgiving, one of Lewis County’s most unique characters and voices left this world.

I recently spoke with Linda Claycamp, Hank’s wife of 30 years and his traveling companion. She told me a little about his unusual life, which ended Nov. 29 at age 70 from congestive heart failure and complications from back surgery.

Hank was born and raised in Chehalis, graduating from high school in 1969. Like that psychedelic year, he burst forth without apology and with an unending sense of possibility.

He was a worker and a vagabond from his earliest years. He was a bonded and licensed painting contractor at age 17. That same year, he also hitchhiked and rode the rails to visit family in Kansas.

After turning 18 he went to Europe for four months to learn the art of glass-blowing. He visited an uncle in Switzerland and his old-country relatives in Denmark, despite not speaking any Danish.

“It was crazy because most of them couldn’t speak English,” Linda said. “He’d sit there and go ‘Uh uh, uh huh.’ And they’d feed him.”

At one point in his European travels he ran out of money and ended up trying to sneak across the border of one country or another. He was caught and almost deported back to America, but ended up convincing them to send him back to Switzerland.

“He was a vagabond and back then they were pretty much against that, the hippie types,” Linda said.

He lived in Alaska for a year or two. He originally went up to work in a logging camp but that only lasted a few days. He had to wait a couple weeks for them to fly him out. He ended up working in a bar. Later he went back up to Alaska to work on a boat fishing for king crab.

He built a house on Roberts Road south of Chehalis, a quirky A-frame. By coincidence, my sister-in-law and her family ended up renting it years later. The story they heard was that this crazy guy named Hank built it over a weekend with his buddies and used an old Volkswagen Bug as the septic tank.

I asked Linda about the Beetle-as-septic-tank story. That event preceded her time with Hank, but she said she thinks it’s true. It certainly wasn’t up to code. It was just Hank’s way, she said.

After the eruption of Mount St. Helens, he had the idea to turn the ash into glass. He trademarked the name and had a glass-blowing studio in downtown Centralia where he would make ornaments, vases, little “everlight” candles, eggs, kerosene lamps and marbles.

"I would try anything in glass," Claycamp told The Chronicle in 2003. "The one thing that won an award was the floor dragon (30 feet long) at Foxwoods Indian casino in Connecticut. They needed gold scales to make it luminescent. I said they had to send a bottle of 18-year-old scotch or I wouldn't even think about it. Two days later, it arrived by air freight. I sat around with the crew trying to figure out how to do it."

He once claimed that he had a premonition of the eruption.

A few of his ash glass pieces had the dull gray look of the Mount St. Helens ash, but most were gorgeously transparent and luminescent. I wondered how he accomplished that with ash as a primary component. There was a simple reason that I discovered when I asked him once how much ash he would use in the glass.

“Oh, I throw a pinch in whenever I think about it,” he said.

He also had a plastering business on the side. That’s where I first met him. My parents hired Hank to do the walls after we remodeled our house. I remember him traipsing around the room with wet plaster balanced on his mortar board, telling jokes and stories in an over-the-top Norwegian accent from behind his trademark walrus mustache. The more I laughed, the crazier he got. It was a good feedback loop.

In 1996 during a American Art Glass Show festival that he recruited to Centralia, he was quoted telling The Chronicle, “I am a craftsman. I’d like to get into art but I have bills to pay.”

After he sold the Mount St. Helens glass company in 1998, he had the idea of turning his old glass-blowing studio into a nightclub.

He burst into the newspaper office one day to tell me all about this groovy new floor he was making from chunks of old-growth fir and little bits of mirror under the finish to catch the light from a disco ball overhead.

The nightclub idea didn’t last, but the floor did. It’s now part of The Juice Box, a new family-friendly taphouse downtown. Co-owner Michael Perozzo told me that Hank’s floor in their beer hall is the most talked-about part of the building.

They have an ode to Hank’s work with new blown glass hanging from the ceiling. It was created by Central Glass Works, but was done so in honor of the Mount St. Helens Ash Glassworks that Hank made the place known for.

Hank’s artwork is scattered around downtown Centralia. He painted a pair of Native Americans paddling a canoe in a mural above the Timeless Treasures antique shop.

In 2012 he created a whimsical old-town Centralia scene on a newly exposed brick wall after a fire destroyed the building at the corner of Tower and Main. He used bits of remaining plaster as a long trail of smoke coming from a steam locomotive.

Later in life Hank and Linda took long trips abroad. Finally an artist unfettered by commerce, Hank would capture scenes from their journeys in vivid watercolor and pastel paintings. Linda tells me that he’d whip them out in ten minutes.

He’d bring them into The Chronicle, casually flipping through the sheaths of paper, each one firing him with fresh enthusiasm to tell us a new story (even if we needed to get back to work). We printed his paintings and his breezy, conversational travel journals on our Voices page — an apt place to run them, because they captured his voice so well.

Recounting the orangutans he saw on a trip to Borneo, he painted one of the playful frizzy-haired orange primates and wrote, “Wow! They’re bigger and hairier than I am.”

He had a way with words as well as images.

Describing a Nepalese rhinoceros in 2017, he wrote, “He was 4,000 pounds of slobber built like an Abrams tank. Pretty majestic.”

His tales, while true-to-life, sometimes took liberties with the details for the sake of the narrative. He was a storyteller, not a journalist.

His travel paintings and journals capture his enthusiastic love of life and his endless confidence that his buoyant personality would make him welcome and successful wherever he went.

“In all the 45 countries we have visited, no one has ever hated Americans, so get that passport and see this big old world,” Hank wrote in 2013 after he and Linda visited Nicaragua. They would add dozens more countries to their list over the years. 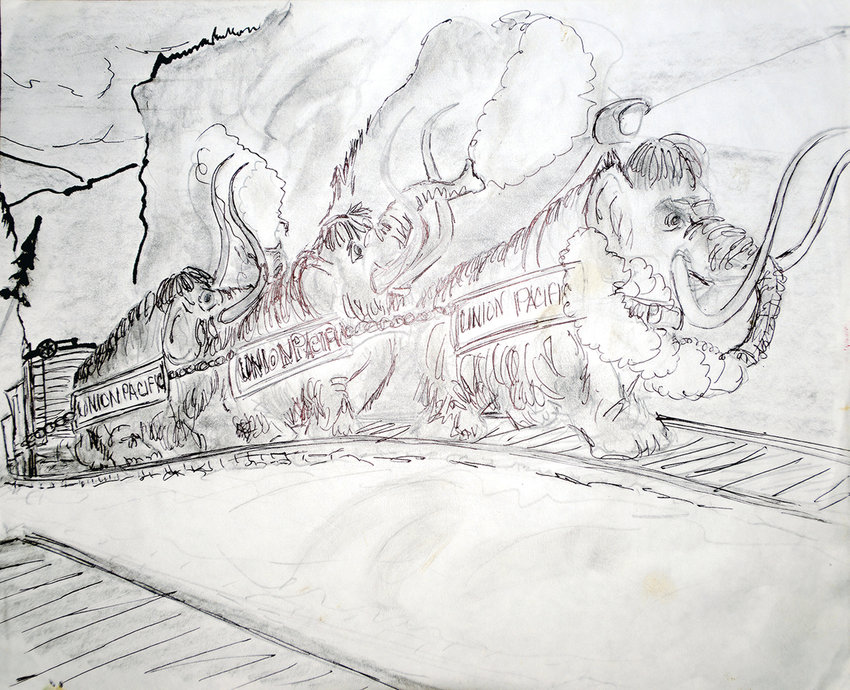 One of his most imaginative essays seems a fitting way to see him off into his last journey.

In 2014 he wrote about riding the rails as a young man. After nearly freezing to death in southern Oregon’s lower Klamath Basin, a compassionate brakeman let him into the caboose to warm up with a cup of coffee.

Later in Northern California, climbing a steep grade, he heard “this grumbling and honking and screaming as the big mountain engines were climbing the grade” and he suddenly had a vision.

“Then I saw a light shooting across the canyon when all all of a sudden I had a vision of three woolly mammoths who were howling and honking with Union Pacific signs on their furry bodies all chained together as they marched up the mountains singing, ‘I’ve been working on the railroad, we’re the UP, we can handle it!’ spitting steam from their long schnozzolas and singing marching songs.”

That crazy scene was Hank Claycamp to a T — his imagination puffing and steaming like those mythical mastodons surmounting his life’s next peak, pulling us all along with him for an unforgettable ride over the next Technicolor horizon.

Note: Article has been updated to correct the description of The Juice Box as a family-friendly taphouse.

Brian Mittge loves the unique characters of Lewis County. He can be reached at brianmittge@hotmail.com.

'You Are a Coward': Family of Woman Murdered on JBLM Blasts Killer During His Sentencing